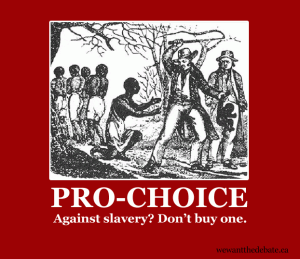 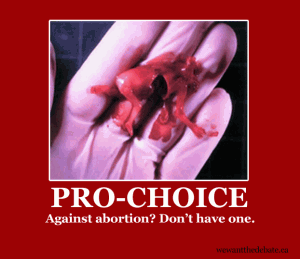 “Crimes against humanity are not simply random acts of carnage. Rather, they are directed at particular groups of people, who have been so degraded and dehumanized that they no longer appear to be fully human or to merit the basic respect and concern that other humans command.

Such crimes attack the very idea of humanity ‐ the conviction that all human beings partake of a common nature and possess an irreducible moral value.

By implication, all human beings have a right, indeed an obligation, to respond ‐ to try to prevent such horrors from occurring and to redress their effects when they occur.”
Confronting Historical Injustice: comparative Perspectives p.34 http://brown.edu/Research/Slavery_Justice/documents/SlaveryAndJustice.pdf

Hello there. Thanks for joining us at We Want The Debate. Because you are here, we know a little something about you. Since you are reading this, you must be a fairly open-minded individual, someone who likes to know both sides of the argument. You are also someone who thinks things over before making a decision, someone who weighs the evidence. You are a reasonable, rational person, but that doesn’t mean you have no feelings. No, you can be compassionate and caring when you need to be. And you certainly know what is fair and unfair, and will definitely be on the right side when push comes to shove. So will you take a little walk through history with us?

“The bulk of the people [in Africa] are slaves to a few freemen, and in some states there is not an individual free but the Prince: from every circumstance of intelligence and observation, the general state of the Negro, is that of slavery and oppression, in every sense of the word. … [F]ew but criminals are sold to the Whites, except prisoners taken in war, who would inevitably be put to death, did not a more profitable mode offer of disposing of them. Slave captain and explorer,  Robert Norris, 1788

“Being in this dreadful captivity and horrible slavery, without any hope of deliverance, for about eight or nine months, beholding the most dreadful scenes of misery and cruelty, and seeing my miserable companions often cruelly lashed, and, as it were, cut to pieces, for the most trifling faults; this made me often tremble and weep, but I escaped better than many of them. For eating a piece of sugar-cane, some were cruelly lashed, or struck over the face, to knock their teeth out.” Ottobah Cugoano, slave, 1787 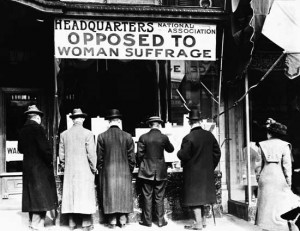 I believe the principles on which the claim to suffrage is founded are those that turn individuals and nations backward and not forward.” From Woman and the Republic by Helen Kendrick Johnson, published in 1913.

“Shall we, as a people, be true to our principles and enfranchise woman? or, shall we drift along in the meanest form of oligarchy known among men-an oligarchy which exalts every sort of a male into a ruler simply because he is a male, and debases every woman into a subject simply because she is a woman?” Mrs. Ellen Battelle Dietrick, Secretary of the New-England Suffrage Association, July, 1895.”

I believe woman suffrage to be the final result of the evolution of a true democracy.” Mrs. Fanny B. Ames, 1896 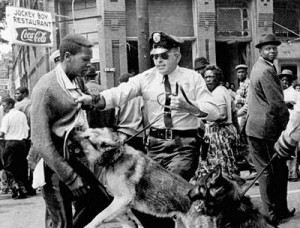 “We have waited for more than 340 years for our constitutional and God-given rights. The nations of Asia and Africa are moving with jet-like speed towards gaining political independence but we still creep at horse and buggy pace towards gaining a cup of coffee at a lunch counter.” Dr. Martin Luther King Jr. 1963

If you had chosen to support the abolition of slavery, the suffrage of women and the civil rights movement of the African American, you would have been on the side of justice and equality.

But for supporting the abolitionists, you would have also been considered a “bigot(s) of benevolence” and a “bawler(s) about humanity”, “blinded by a surfeit of ‘zeal’ and ‘enthusiasm’, shamelessly tugging on the heartstrings of a credulous reading public.” You would have been ridiculed for your beliefs and humiliated as an Englishman because you promote the ruin not only of the British sugar plantations, but of Britain itself.

For supporting the suffragettes, you would have been disgraced, especially if you are a man, because you champion “both despotism and anarchy” which “are more friendly to woman’s political aspirations than is any form of constitutional government.” You would, in fact, have been a laughing stock for your defense of any woman-suffrage bill, since all governmental parties treated it as a joke.

And for supporting the civil rights movement in the US, you would have been considered a “traitor” and a “nigger-lover”. You would have ridiculed and ostracized for attempting to equate the inferior black man with the obviously superior white man. You would have been viewed as a radical trying to destroy “the Southern way of life.”

Radical for supporting the abolition of slavery, the political emancipation of women and the integration of African Americans into all aspects of American life, you would have been considered a radical because you went against the mainstream way of thinking in favour of supporting the very rights and personhood of those being oppressed.

So Now Make Your Choice…

Our Mission: To ensure women’s reproductive freedom by protecting and advancing access to abortion and quality reproductive health care

Our Vision: To achieve equality, all women must have the right to decide for themselves whether and when they will bear children, and how many. Without control of their fertility, women cannot have autonomy over their lives and cannot play a full and equal role in society…

Mission:To promote the sanctity of all human life from conception/fertilization to natural death through public education. To advocate for the pre-born, the disabled, the infirm, the elderly and the dying who are all uniquely created by God.We do hereby declare that it is the purpose of the pro-life movement to encourage through education the development of a culture of life which will restore full legal protection to all human beings, from fertilization/cloning to natural death, using peaceful and prayerful means in the pursuit of this goal.

Pro-Life or Pro-Choice: which side are you on?

Eleanor Kirk, a novelist whose husband deserted her after a decade of physical abuse and infidelity. In both her novel and in her essays, Kirk castigated abortion doctors and argued passionately for the rights of women workers.

Like many of the early suffragists, Kirk wrote for The Revolution, the newspaper published by Susan B. Anthony and Elizabeth Cady Stanton. In “A Word to Abused Wives,” she argued that women should not wait for the vote before leaving an abuser:

Ten miserable years of married life, in which every article of the wifely contract was performed to the letter, and, as far as possible, in the required spirit—ten years of abuse, drunkenness, infidelity and poverty—ten years of childbearing and child-nursing—deprived of home comforts—cursed, kicked, and finally deserted—has led me to a place where I may not say “wait.” No one can be more fully alive to the signs of the times; no one can see, with a clearer vision, the immense benefit accruing to all from female suffrage, than the writer…”

Knowing from bitter experience that not all women could rely on husbands and fathers to support them, Kirk skewers a common anti-suffrage refrain in a Revolution article titled “What Will Become of the Babies”: “What will become of your babies, madam, should you be suddenly deprived of the means of their support? Have you the courage, stamina, ay, ability, to fight the world single-handed?” A woman, she argues, needs voting and working rights.

It is in the context of “What Will Become of the Babies” that Kirk suggests feminism is the key to eradicating abortion:

Physicians who have graduated from our first medical colleges, physicians with high sounding diplomas, whose elegant equipages stand in front of Fifth Avenue mansions, who pocket a big fee and a little bundle of flesh at the same time, and nobody’s the wiser! not even the husband in hosts of instances.

What will become of the babies—did you ask—and you? Can you not see that the idea is to educate women that they may be self-reliant, self-sustaining, self-respected? The wheel is a big one, and needs a strong push, and a push all together, giving to it an impulse that will keep it constantly revolving, and the first revolution must be Female Suffrage. After this, the ponderous affair will move regularly, and perhaps slowly; but education, more physical, and intellectually practical, will as surely follow as dawn follows the darkness of night…. God speed the time, for the sake of the babies. Little ones will then be welcome, and mothers will know enough to instruct them sensibly, with a view to the practical side of life.

Look Who’s Not Showing Up For A Debate
Well, just what are we before we are born?

One Response to Wrong Then, Wrong Now