By admin on November 6, 2011 in Challenging the Paradigm 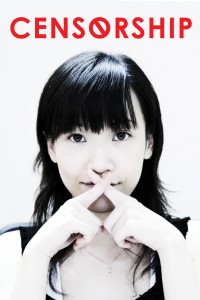 We are highlighting what has been happening to university students who wish, just like their fellow students, to establish clubs which reflect their world view.

Just so we are all on the same page, here is what Wikipedia says about what a university is and what it does:

In 1963, the Robbins Report on universities in the United Kingdom concluded that such institutions should have four main “objectives essential to any properly balanced system: instruction in skills; the promotion of the general powers of the mind so as to produce not mere specialists but rather cultivated men and women; to maintain research in balance with teaching, since teaching should not be separated from the advancement of learning and the search for truth; and to transmit a common culture and common standards of citizenship.” ( http://en.wikipedia.org/wiki/University)

We will come back to this in a while.

You may not know, but there is a organization called National Campus Life Network which assists and supports 28 pro-life clubs in Universities across Canada, fourteen of these clubs are in Ontario. In the last three years 9 of these clubs across Canada have been under attack from their campus students’ union where both they and other clubs actually expect help.

Before we go any further we would appreciate it if you would watch the following video:

Well if that is being treated like a VIP – I would rather be neglected! The following is the recent press release from Carleton Lifeline.

Trespassing charges that were filed against members of Carleton Lifeline, the pro-life student club at Carleton University, were withdrawn by the Crown yesterday.

On October 4, 2010, members of Carleton Lifeline, a pro-life club at Carleton University, were arrested for attempting to peacefully display the Genocide Awareness Project, an exhibit which compares abortion to other forms of genocide. The University deemed the Genocide Awareness Project to be “offensive” and directed the Ottawa Police Service to arrest and charge four Carleton University tuition-paying students and a Queen’s University student with trespassing. The charges were scheduled to proceed to trial today and tomorrow (November 2nd, 2011).

The Crown stated that the basis for withdrawing the trespass charges is that the issues dealing with the relationship between a university and its students was already being dealt with in Lobo et al. v. Carleton University et al., the civil action brought by two Carleton Lifeline members, Ruth (Lobo) Shaw and John McLeod, against Carleton University and members of its administration.

In July, the Ontario Superior Court heard a motion brought by Carleton University which sought to strike Carleton Lifeline’s Statement of Claim, the document initiating the lawsuit. Had the university been successful, this would have ended the suit. In a split decision, Justice Toscano Roccamo ordered that the action could continue but ordered Carleton Lifeline to make several amendments to its Statement of Claim.

“We are pleased that the Crown has decided to withdraw these unjust charges” said Ruth (Lobo) Shaw, former president of Carleton Lifeline. “We have always maintained that we had the right to exhibit the Genocide Awareness Project on campus and that our arrest was unlawful. The withdrawal of these unjust charges is confirmation of that fact.”

Despite the withdrawal of the charges, the civil action against Carleton University is ongoing. “Although we no longer need to defend ourselves against the trespassing charges, a lot of work still needs to be done to move our lawsuit against Carleton University along and to clarify the legal rights of students to campus free speech and expression,” said John McLeod, current president of Carleton Lifeline.

Cases of Censorship and Discrimination from the Past Three Years  (http://www.ncln.ca/campuses/discrimination-on-campus/) 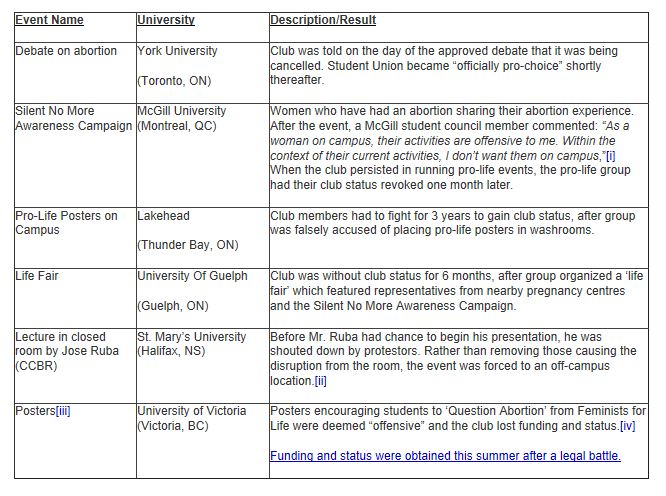 “objectives essential to any properly balanced system: instruction in skills; the promotion of the general powers of the mind so as to produce not mere specialists but rather cultivated men and women; to maintain research in balance with teaching, since teaching should not be separated from the advancement of learning and the search for truth; and to transmit a common culture and common standards of citizenship.”…..

What skills are students learning when University administration’s sit back and watch some of their students being bullied by the very union which should be defending them?

What skills are students learning when administrations attack them because their world view and how they choose to show publically it, is deemed “offensive” or “politically incorrect”?

What skills are students learning when those in authority, with the money and the power wield the authority of a public institution to promote and defend private beliefs?

What skills are students learning when they watch censorship and discrimination actually dominating democracy in Canada?

How will our students ever be able to search or discern the truth if they are not allowed to hear the voices of all worldviews in an environment where they are being formed.

Founding Principles of the Federation (http://cfsontario.ca/en/section/10)

These are the Founding Principles of the Canadian Federation of Students and all member unions which are laudable to read.

However, if you are student with a pro-life worldview your interests are not served, you cannot share and exchange information, you are not granted effective distribution of resources, you can never develop a sense of community with your peers because you are treated differently because of your worldview. How are pro-life students’ desires articulated by a federation that not only appears to despise their beliefs but which openly lobbies agains their clubs? To add insult to injury, pro-life students have no choice to opt out of union fees even when those unions have declared themselves supportive of abortion.

If students are being taught that this kind of bullying is acceptable in an institution dedicated to higher learning then what kind of society will these students create?

Abortion Industry Masquerading as the Voice for Choice in Canada
FOR IMMEDIATE RELEASE – Abortion: There is Everything to Debate…

One Response to Promote abortion as a morally acceptable choice or be denied club status!