By admin on October 24, 2011 in Challenging the Paradigm 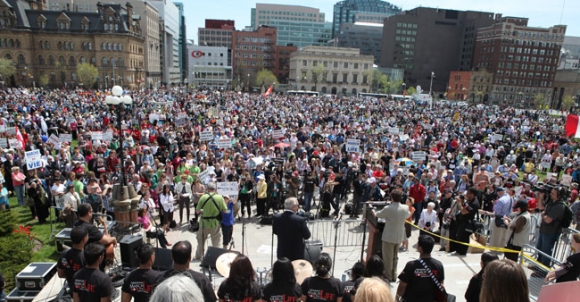 OTTAWA, May 14, 2001 (LSN.ca) – March for Life 2001 was a success with some 3,300 in attendance in the nation’s capital on Friday, demanding an end to discrimination against unborn babies. The most remarkable feature of this year’s March was the large percentage of young people in the ranks of the pro-life demonstrators.

LifeSite has searched all media outlets for news reports on the March for Life and found no coverage except on the Canadian Public Affairs Channel and a small mention of the pre-March press conference by PEI’s Charlottetown Guardian. http://www.lifesitenews.com/news/ottawa-march-for-life-a-success-despite-media-blackout

OTTAWA, May 15, 2003 (LifeSiteNews.com) – LifeSite News staff are rejuvenated after having attended the Canadian national March for Life in Ottawa yesterday.  Over 3,500 pro-lifers joined in the March which was led this year by fourth degree Knights of Columbus in full regalia. The numbers showed an increase of over 1000 participants from last year’s count.  The march from Parliament commenced with encouraging speeches by pro-life parliamentarians, pro-life leaders and religious leaders including two Catholic bishops.  Despite media advisories sent to all major media announcing the March, a search of Canadian English media coverage exposed a total media blackout of the event.  Even locally, the Ottawa Citizen newspaper failed to cover the event in today’s paper.  LifeSite searched for coverage in all major media outlets including CBC, CTV, Global, National Post, Globe and Mail, and the Toronto Star. http://www.lifesitenews.com/news/archive/ldn/2003/may/03051501

OTTAWA, Canada, May 15, 2007 (LifeSiteNews.com) – Media coverage of the 2007 March for Life, the largest on record with about 7,000 Canadians participating—was almost universally inaccurate, biased or simply non-existent. While the National Post stood out as the only major newspaper to offer accurate coverage of the biggest annual demonstration to be held on Parliament Hill, most media outlets either radically reduced the number of participants or ignored the March altogether

CTV News affiliate Ottawa’s CJOH said on its 6 p.m. report that “Hundreds of people from across the country marched from Ottawa’s St. Patrick’s Basilica and then gathered on Parliament Hill.”

Both the Globe and Mail and the Toronto Star failed to report on the March for Life, offering no coverage of the event whatsoever. Neither the Ottawa Citizen nor the Ottawa Sun reported on the March. Macleans.ca quoted media reports and police estimates of somewhere between two and three thousand. The CBC National News said “about 1,500 demonstrators” gathered on the Hill. Despite the inaccurate coverage from CBC National, the CBC offered much better coverage with senior parliamentary editor Don Newman’s Politics on Newsworld Thursday night. “Pro-life anti-abortionists staged one of their largest Parliament Hill protests and rallies in recent years,” Newman said. http://www.lifesitenews.com/news/archive/ldn/1970/51/7051510 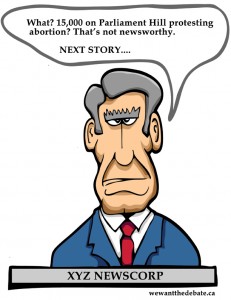 OTTAWA, May 12, 2008 (LifeSiteNews.com) – Apart from a few second audio remark on Mike Duffy’s show on CTV there was absolutely no national coverage of the 8000-strong March for Life which took place in the national capital on May 8. http://www.lifesitenews.com/news/8000-strong-march-for-life-gets-another-national-media-blackout-in-canada

TORONTO, May 27, 2009 (LifeSiteNews.com) – Like the CBC, the Toronto Star, which is Canada’s largest newspaper based in Canada’s largest city, failed to report on the over 12,000 Canadians who marched for life at Parliament Hill earlier this May……. “How is it that CBC’s national news desk has in the recent past given lengthy coverage to a paltry 200 individuals at a pro-marijuana rally on the Hill,” asks the letter, “but fails to notice 12,000+ prolife citizens overflowing the grounds of Parliament Hill?” http://www.lifesitenews.com/news/archive/ldn/2009/may/09052709

OTTAWA, Ontario, May 17, 2010 (LifeSiteNews.com) – The Canadian March for Life on Parliament Hill in Ottawa drew unprecedented media coverage from across the country this year, hitting the front page of major national papers, and receiving prominent attention from the broadcast networks.

The event made the cover of the National Post (NP), which featured a large shot of a young pro-life man, and the headline ‘Sense of momentum bolsters pro-life rally.’

The march also got full front-page coverage from the Toronto and Ottawa Sun, as well as in 24 in Ottawa and Toronto.  It drew 30-second pieces on CBC’s The National and the CTV National News, and it was the lead item on CTV Ottawa, with over two minutes devoted to the event.

The Toronto Star’s coverage, however, which featured a large front-page shot of the crowd, is perhaps the most notable given the paper’s wide circulation and well-known pro-abortion leanings. The Star article, which described the crowd as “huge” in the headline, estimated the number of attendees at 15,000, exceeding the 12,500 estimated by the organizer, Campaign Life Coalition.

This level of coverage is unprecedented in the March’s 13-year history.  Media silence regarding the march, even in the face of hours-long traffic disruptions in downtown Ottawa, has become cliché among pro-lifers, and even Archbishop of Ottawa Terrence Prendergast made reference to it in his homily Thursday at the cathedral. http://www.lifesitenews.com/news/archive/ldn/2010/may/10051710

There are those who just wonder if this 2010 coverage was due to the fact that Mr Harper announced that Canada’s Maternal and Child Health Policy would not be including funding for abortion  to further highlight his so-called ”hidden agenda”. However, if the general disinterest were regarding any other topic than abortion what would we say about our media. How are the public ever to know all the support or opposition that any issue has if the media play favourites?

The tradition is there, a general media blackout regarding the largest annual show of pro-life support in our country.

As another current example, this campaign sent a comprehensive news release through the Canada News Wire to every large and small media outlet in radio, TV and printed news across this country on October 17th 2011. To date, LifeSiteNews ran our campaign as it’s top story for two days, one radio station in BC, RoadKill Radio, a local newspaper, The Guelph Mercury in Ontario are the only ones who have taken the time to contact us for further information. Now what would we call that?

PRESS RELEASE – We Want The Debate
Distorting the News

One Response to Media Bias?