By admin on November 12, 2011 in Challenging the Paradigm, Our Universities 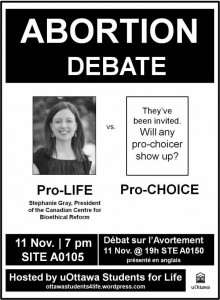 On Friday November 11th 2011, The Ottawa University Medical Students for Life and the Ottawa Students for Life Club hosted a debate on “Should physicians provide or refer for abortions?”  The event had been planned for several months and at the outset both pro-life and pro-choice speakers were invited.  Stephanie Grey from the Canadian Centre for Bioethical Reform accepted, but no one from the following list of well known pro-choice advocates responded. You have to say well done to Jovan Morales from the Atheist Community of the University of Ottawa at least he had the courage to stand up for his convictions.

You can view the debate below.

University of Ottawa – abortion debate Nov 11, 2011 from Jeannie on Vimeo.

Below is the list of people who either declined, or did not reply, or ignored the organizers’ invitations. There have been accusations that because these abortion advocates refused or were too disinterested to debate that somehow the debate was unfair. What this really shows is that those who promote choice do not feel they are obliged to defend it. Well, we hope they change their minds because we are going to have a debate with or without them.

FOR IMMEDIATE RELEASE – Abortion: There is Everything to Debate…
Wrong Then, Wrong Now