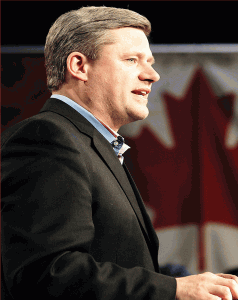 During the last Federal Election in May, Prime Minister Stephen Harper stated on more than one occasion that he “would not open the debate on abortion”. He had already said this during an interview with Peter Mansbridge earlier in the year.

This is not the first time Prime Minister Harper has made a proclamation on abortion during an election. During the 2004 race he ‘assured’ voters that he would not allow any ‘government backed abortion legislation’ if he should win. During the same election then Prime Minister Paul Martin vowed not to act on any private member bills on abortion. At the same time the leader of the NDP Jack Layton insisted his MP’s would not be allowed a “free vote” on any abortion bill and, most worryingly, the then leader of the Bloc Quebecois, Giles Duceppe, announced he would ‘bring down’ a government which made any move against abortion.

If you are concerned the above is ‘pro-life spin’ of the events of 2004, it could interest you to know the entire paragraph is sourced from an article on a ‘pro-choice’ web site, where the above events appear to be celebrated. The article can be found in full at: http://www.prochoiceactionnetwork-canada.org/articles/election-chronology.shtml

We at We Want The Debate must be clear on one point; we are not critical of the position of any of the above politicians in itself. We would strongly disagree with any ‘pro-choice’ stance, and seek to challenge it at every opportunity, but an opposing opinion is the right of any Canadian.

What we do find despicable is the disregard for democracy shown by these statements. Prime Minister Harper has and will prevent this issue even being discussed at any meaningful level, whilst former Prime Minister Martin and former leaders Jack Layton and Giles Duceppe threatened to pervert, resist and even ignore or overturn the democratic will of Canada. This is not democracy. Enshrining any issue in such a manner is an act of tyranny.

We at We Want The Debate are not demanding every politician convert to a pro-life position. We are not demanding that all ‘pro-choice’ arguments be silenced, a stance which separates us from our opponents. What we are insisting on is that this issue, like any other, deserves to be discussed openly and fairly. We insist that the Canadian people should be informed on all aspects of the abortion debate. We demand our politicians allow this to happen, regardless of their personal political aspirations. We demand that anyone in the political sphere, be it entire parties, separate caucuses or individuals fighting alone be allowed to voice a belief on this issue and have it heard and discussed. In short;

WE WANT THE DEBATE

If you feel inclined to ignore the above because ‘the abortion issue’ is not one you feel strongly about, consider the following question;

If the government of Canada can pervert and ignore democracy on this issue, what would prevent it doing so on any other issue? The answer is nothing, nothing at all.

One Response to Debate Closed?